Growing up, food was always a part of my life. I would savour the simplicity of a sandwich but equally look forward to the excitement of home parties filled with decadent and delicious food!  Looking back, launching my own catering company was originally never part of the plan having then decided to study Latin at Nottingham University. One of my first jobs was, in fact, an office-based role, and it was during this time that I decided I would take the leap into the world of catering.

Having spent some time training at Leiths School of Food and Wine in London and gaining my diploma it was then that I found my first role working for Le Caprice restaurant.  I look back at that time with such fond memories as it was by far one of the best and most exciting catering experiences I have had.  From the long eighteen-hour shifts (a double a week was quite often part of the rota), through to the early starts and late finishes, I didn’t seem to mind the craziness and buzz of that world! 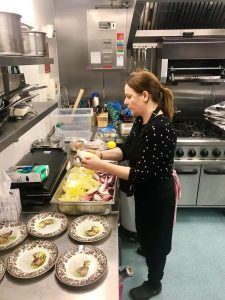 It was at Le Caprice that I gained a very rounded experience of learning to become a chef and being able to work under pressure.  I spent time on many different sections and stations, from kitchen through to larder, from vegetable to sauces, finally culminating in a six-month placement working in the pastry section.  Each area proved to be quite a fight to prove myself to the Head Chef and to persuade him to move me up when he felt I was ready (which by the way was never when I thought I was!).

One of the highlights of my time there were the weekly specials tastings, which I would always look forward to.  Here we would learn the importance of seasonal food and ingredients.  I was taught that whilst working with high-quality produce, it was important that food is showcased with as little fuss as possible, letting the produce and ingredients speak for themselves.  This really made a lasting impression on me, and I still love to follow this method today when I am catering for events or private dinners.

I was very lucky at the time to work with some wonderful co-workers who have gone to achieve amazing careers including James Golding at The Pig Group, Lee Streeton at the Fox Inn in Corscombe and my first ever Head Chef, the eminent Mark Hix.  Plus, the many others all working hard behind the scenes, following their passions, and inspiring us all.

It wasn’t easy leaving Le Caprice as it was such an exciting experience for me, but I then went on to become a Junior Sous Chef at the Bleeding Heart restaurant before returning back to the Caprice Group. Who would have thought back then that fast forward a few years and I would be working on my own catering adventure, launching dido’s fine food in Thame, Oxfordshire! It is wonderful to be able to combine my passion for food and experience in catering and bring it to many events and private dinners across Oxfordshire and Buckinghamshire.

If you are planning an event, private dinner or wedding, then why not email or call for a no-obligation catering consultation.

I am so lucky and thankful to have such a dedicate

If you are planning an event in October, we would

All praise the Aubergine! ⁠ ⁠ The team here at

Scrumptious sweet treats made especially for your

Eating with your eyes?⁠ ⁠ We don’t blame you

It is vital we all find time for ourselves and tak